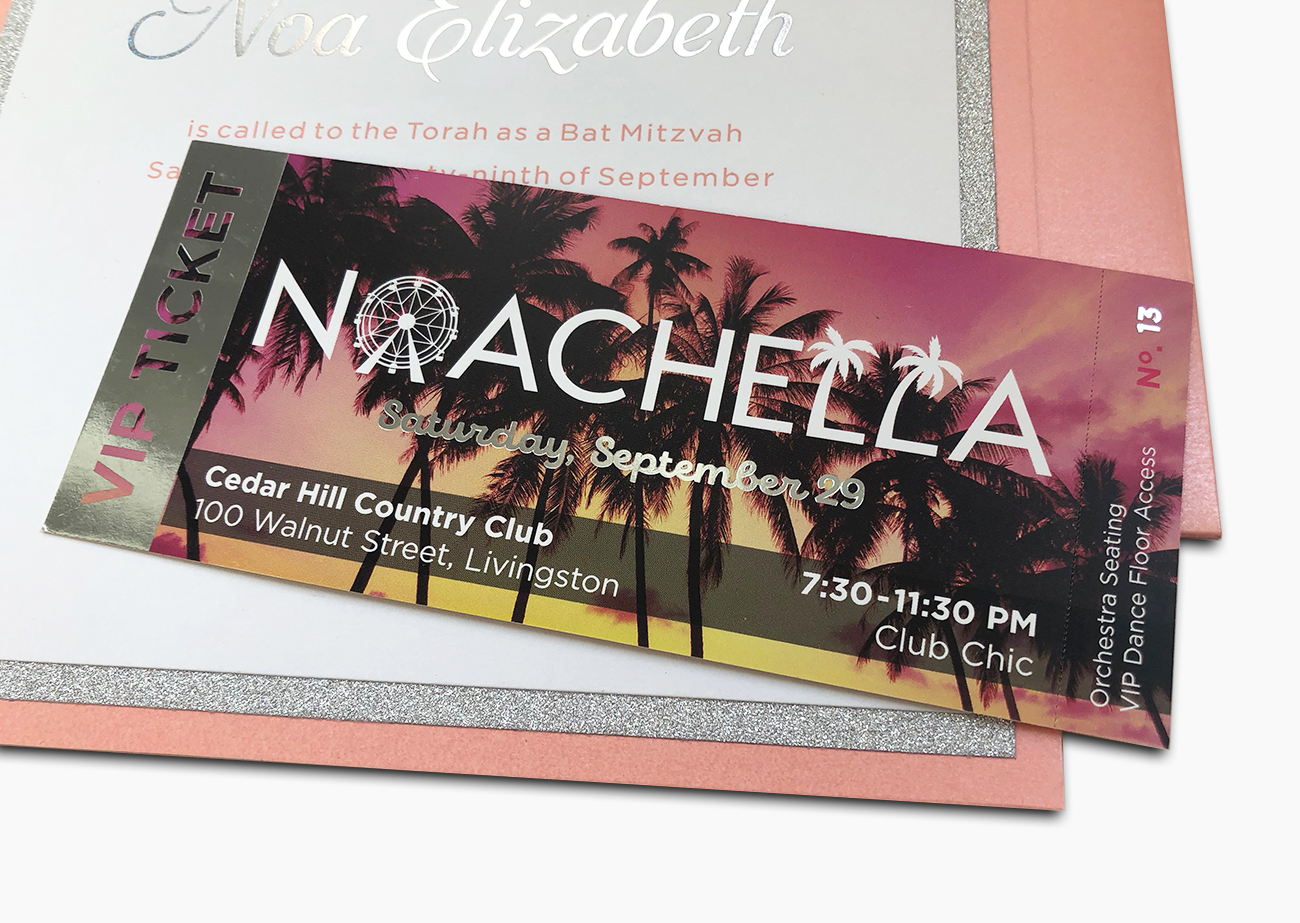 Posted at 16:25h in Logo Design, Party Swag by jessica

A huge ferris wheel is one of the signature visual elements of the Coachella skyline. Conveniently, it’s mostly circular, like the letter O in the middle of Noa’s name, so it became the central figure of her Bat Mitzvah logo. The ferris wheel supports were rearranged to create a subtle, almost subliminal, Star of David, as a nod to the Jewish purpose of the event. Because Noa’s party was at night, she chose a color from the sunset — a peachy-pink/coral (eerily predicting Pantone’s 2019 color of the year! Trendsetting!) To dial up the glam, a dotted border reminiscent of a dressing room mirror or carnival midway lights was added.

In addition to the Noa logo above, an extended “Noachella” version was created to be used wherever the event name was needed. Palm tree-topped letter L’s were designed to add the perfect California desert vibe, and also to visually balance the right side of the word. The full-color version doubled down on the sunset idea, with a graphic gradient of three coordinating colors.

To accompany the more formal blush, white, and silver synagogue service invitation (from Stationery Stephanie), a custom “VIP ticket” to Noachella was created. The longer logo was set against a photo of palm trees at sunset, and silver foil highlights were added to echo the shimmering formal invitation. For an official look, the tickets were printed on heavy gloss stock with a perforated, ticket stub end. All tickets were number 13, appropriately.

A coordinating custom stamp ties the formal invitation and reception ticket together visually, adds color, and hints at the theme.

Because nobody can resist a cute sticker, especially a holographic one, ordered a stack of trippy logo stickers from StickerApp. These later became party favors.

A sign-in board was created with the help of Boaz Fields, who printed the logo and palm tree photo onto a 2-foot by 3-foot pallet of reclaimed wood. This sign was mounted on an easel at the entrance to the party, with gold and silver Sharpies within reach.

Highlighting the music festival aspect of the original Coachella, we designed plastic backstage VIP passes to use as place cards. These passes, printed by SmartyPass, were hung from their lanyards on a palm tree at the entrance to the reception room. The guests’ names were printed on one side, and table numbers on the reverse.

Two styles of pillow were designed for the kids’ lounge — a square Noa logo pillow with the palm tree design, and a rectangular Noachella pillow that added more visual variety with a concert crowd scene and blue and black color scheme.

Distressed grey sweatpants were printed with a Noa logo and given out as party favors. The sweatpants were rolled up and secured with VIP passes, cutting down on gift bag waste and expense.

Through the thoughtful design of fun and funky custom elements, an atmosphere of desert festival glam was brought to a country club in New Jersey, and a Bat Mitzvah gal is still aglow.